I ran into an unexpected issue during the migration to VPC over the weekend. The NAT instances, all of which are t1.micro size, could not handle the network traffic between the web servers and the backend servers. Our traffic backed up to the point that requests started timing out. The disastrous result was downtime.

The last thing I did to the production system before the weekend was move Lucidchart's web servers into the VPC. These web servers are located in two of the four AZs in us-east. Remember from my VPC setup that each AZ has a single NAT instance of size t1.micro. This means that all traffic between the web servers and the MySQL database, MongoDB database, cache servers, and internal services was being funneled through two t1.micro instances. 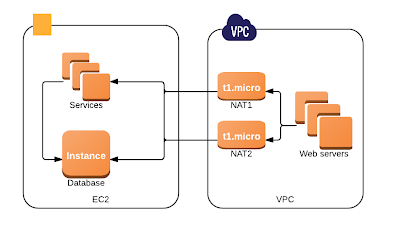 Moving the web servers into VPC didn't immediately trigger any errors. The bandwidth was sustainable until a couple of rather obnoxious queries were made to the MySQL server, queries that returned mountains of data. To help things along, our javascript client, after timing out, retried the same query. As soon as the traffic exceeded the t1.micro's capacity, we had issues. 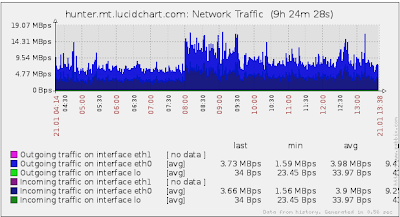 At 08:00 UTC in the graph above, the network traffic through one of our NATs jumped from 5MBps to 13MBps. While we have had higher spikes, the sustained throughput for the next hour and a half wreaked havoc on all of the users. Eventually, everything calmed down, and we got to the fix.

It only took one more bout of downtime to force an upgrade of the t1.micro to an m1.large - the difference in bandwidth was enough to handle any other issues. Keep in mind that this all happened over a weekend, so I was reluctant to finish the migration in its entirety, which also would have solved the problem. The NAT instances are EBS backed, so upgrading was fairly simple.

If you followed my VPC setup, and are running into this issue, here are the steps for upgrading your t1.micro to an m1.large. It does require downtime on a single availability zone at a time.
Switching from t1.micro to m1.large should, at the very least, hold your system over until you can finish the migration to VPC - the real solution.

While this problem was unfortunate and unexpected, it was certainly preventable. In hindsight, I can think of three separate ways that this issue could have been mitigated.
Of the techniques listed above, I would choose the second. It guarantees no issues while minimizing errors. Whatever your flavor of mitigation, at least be aware of the bandwidth bottleneck that lurks in a migration to VPC.
Posted by Unknown at 8:00 AM