How to Use LVM and LUKS with EBS Volumes

A while back, I had posted my findings on encryption at rest using LUKS. Circling back, here's the procedure I used. Although I was operating on Ubuntu 12.04 and EBS volumes, this same procedure can be used in many different scenarios.

Here's the end goal looks like for every mountpoint. If you have multiple mountpoints, this entire structure will be duplicated multiple times. 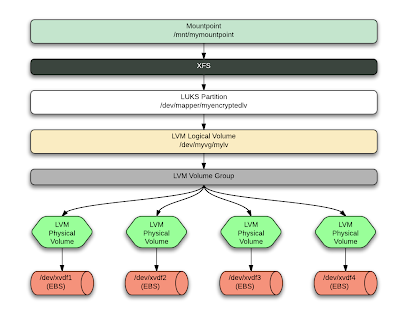 If you've already got the disks in /dev/, then you can skip this section.

The first thing you need to do is establish your block devices. For me, that meant creating and attaching a number of EBS volumes. I found that using 4 striped block devices yielded the fastest I/O, so that's what I used and what I recommend. These disks don't have to be EBS volumes, they could be physical disks attached to your backup machine, ephemeral storage on AWS instances, or a couple of thumb drives. Except for EBS volumes, I'm going to assume that you know how to attach block devices to your server.

There are a couple ways to create and attach EBS volumes. You could use the command line tools or the AWS console. If you don't know how to do this step, AWS has great documentation. Go with the AWS console and perhaps even ask for help in their forums.

Each block device should be of the same size as all the others. We'll be using LVM to create a striped RAID array. If one disk is larger than the others, you will run into errors when creating logical volumes.

When an EBS volume is newly created, it is full of zeros. LUKS will only fill the disk with encrypted data as it needs to. So, unless you want to give a hacker clues about which portions of the disk are full of "real" data, you would be smart to sanitize the disk. One way to do that is to fill it with data from /dev/urandom. The way that I've found to be the fastest is to create a LUKS partition with a very small key, write zeros to it, and then delete the LUKS partition.

Now that we have block devices, we're going to create physical volumes, a volume group, and a logical volume. Before you can do that, you'll need to install lvm tools. On ubuntu 12.04, the command is:

For each block device, create a new physical volume. This writes LVM headers to the disk. The command is very simple.

You can now use `sudo pvscan` to display all the physical volumes. `sudo pvdisplay` will show additional details.

Create exactly one volume group with all the physical volumes.

You can now use `sudo vgscan` to display all the volume groups. `sudo vgdisplay` will show additional details.

You can now use `sudo lvscan` to display all the logical volumes. `sudo lvdisplay` will show additional details.

Each volume group supports multiple logical volumes, but in practice, I like to associate a set of physical volumes with a single mountpoint and a single application. The only exception that I've found is ephemeral storage. AWS provides zero to many ephemeral volumes and I use LVM with RAID 0 to create 20G swap, 20G /tmp, and XG /mnt partitions.

A logical volume is presented as a block device. At this point, you should be able to see /dev/myvg/mylv on the file system. If you want to skip LUKS setup, do it. This block device can be used for XFS, EXT3, or any other file system you desire.

First, let me urge you to think about your keys. Linux Unified Key Setup (LUKS) partitions are unrecoverable if the keys are lost. You don't want to find yourself in a situation like that of tech startup Recurly. They lost their encryption keys due to a hardward failure, and it cost them a lot of time, money, and customers to recover. It's very important that you keep your keys in redundant safe locations. At Lucid, we have 2 keys per LUKS partition, and each key is stored in at least 2 different secure locations. I highly recommend you do something similar.

Before we create the LUKS partition, we need to install LUKS. On Ubuntu 12.04:

Any file or passphrase can be used as a key for LUKS. I recommend using two different 4kB random files. To generate these, run these commands.

Reminder! Now is a good time to create backups of your keys. Make sure they are in multiple locations. Again, you don't want to lose these keys.

To help LUKS perform at its peak, we need to enable some kernel modules. The modules we need are:
Run these commands to load each of these modules.

The LUKS partition exists on /dev/myvg/mylv, but there is no way to access the data in its unencrypted format right now. We need to open the LUKS partition. We can do this using either key file.

There is a new block device waiting for you in /dev/mapper/myencryptedlv. When data is written to this block device, LUKS will encrypt it and write it to the logical volume we set up earlier.

Your volume does not have to have XFS, it can be any file system. I chose XFS because I'm familiar with it.

The new XFS filesystem can be mounted now, but it won't be available at boot time. We'll add 'noauto' to the fstab to make sure the server doesn't get stuck in booting state waiting for a drive to show up.

You can verify your new setup using `df` or `mount`. You have done it!

If you ever want to detach an EBS volume while the instance is still running, you'll need to perform a few operations first. We need to unmount the filesystem, close LUKS, and disable LVM.
You can now detach the EBS volumes from the instance.

There is no special procedure or commands needed to reboot or shutdown the machine. Operate as you normally would.

The encrypted volume will not show up when you boot a machine, because it can't - it doesn't have the keys. Hopefully you were smart enough to not store the encryption keys on the box. After you get one of the keys on the server, run these commands.

LVM and LUKS have been a tremendous help in managing Lucid's infrastructure. They have also presented their own set of problems and challenges. Allow me to shed some light on the fun you'll have in the near future.

Think about taking snapshots, deleting unused snapshots, restoring from snapshots, migrating snapshots to other regions, and anything else you do with snapshots. Introducing more EBS volumes means introducing more complexity in their snapshots. This is nothing that a short script won't handle, but be aware that it can get painful. For ease of management, I recommend that each logical snapshot contains a UUID and a count of EBS volumes used to create it.

With an encrypted disk, every time you reboot a server, manual intervention is required to bring it back up fully. It requires somebody with access to an encryption key be available 24/7. Also, starting a server takes an additional minute or so, because of the time to scp the file, remember the cryptsetup command, and mount the disk.

You don't want to leave your key files anywhere but secure locations. Every place you scp the file needs to be scrubbed. We use this simple command.

It overwrites the keyfile with random junk, and then deletes the file.